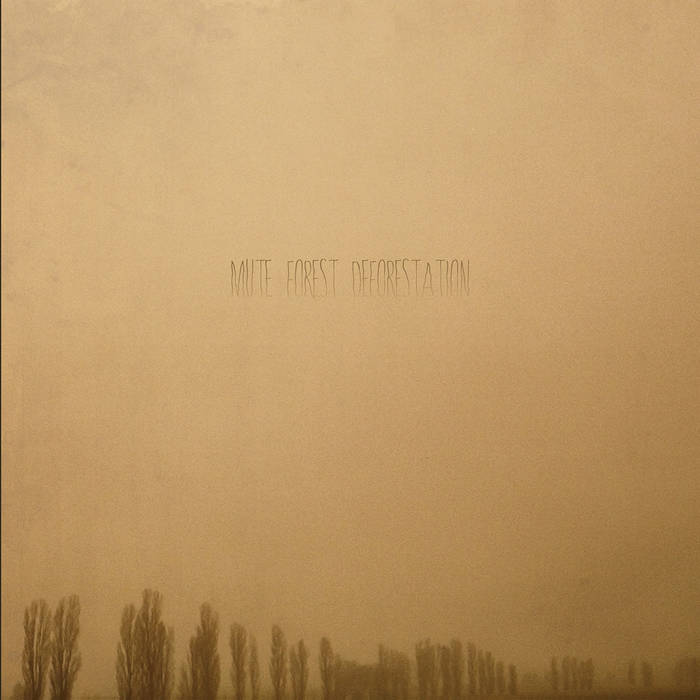 Mubla Na Thguob I only play this late at night.

Indielist First of all, it's unfair to make someone choose the best track off of an absolutely stellar album! The production quality is top notch and I'm looking forward to future releases.

I did choose Deforestation though...the video for the title track from this album is simply stunning.

My copy of the LP showed up today and not only was it in perfect shape, but it was sealed in great adhesive backed plastic sleeve.

All in all, 50 billion stars. Keep it up! Favorite track: Deforestation.

In a seemingly ceaseless acreage near his childhood home in the Rockies of Colorado, Kael Smith (Mombi, Khale) takes a deep breath and listens critically to the forest. It is not the same sound he remembers as a youth, when he’d disappear for hours deep into these woods. No, the sound he hears today is unfamiliar and vapid. Muted, really.

Since Smith’s departure to the city of Denver; the Mountain Pine Beetle has moved into these woodlands and decimated the trees; devouring their insides and leaving empty husks in its wake. It is among these thinned out swaths a word keeps repeating back to him, over and over, incessantly… 'Deforestation.'

Over the last decade, Smith has approached songwriting with a similar respect he had for the wilderness as a young boy. Whether it was the cyclical dark melodies of his band Mombi’s 2011 LP 'The Wounded Beat' or the careful layering of his debut EP Infinity Pools, released this year under the Mute Forest moniker, Smith has taken extreme care to the subtleties of his recordings. Along with several respected outlets, Stereogum in particular deemed 'Infinity Pools EP' as having “the effect of watching a gray, drizzly dawn over a dystopian future-metropolis.” While Fractured Air minced no words saying, “It conjures up the timeless sounds of Helios, Benoît Pioulard and a host of other electro-acoustic milestones”. And while it’s easy (and probably flattering) to be compared to other stalwarts operating within similar genres, with Deforestation Smith takes a confident step towards his own signature sound; out of the driving rain and into the filtered light through stricken trees.

Painstakingly written, recorded and mixed at his home studio in Denver, 'Deforestation' sprawls across nine sonorous and meticulously wrought tracks containing elements of minimal electronic, ambient and folk. Large cavernous beats, micro ambient deconstruction and nylon guitar all swirl into a coherent palate left for Smith’s poignant, intimate words. Zoom in further and one quickly hears Smith’s nuance at work. The frail techno skeleton of the track “Automatism” contains electrical pops and crackles captured from a spontaneous lightening storm through an amp. Following in order, the hall-of-mirrors piece “Back of Cave” conjures up the endless reflections of a racquetball court with it’s multi-taped percussion and Smith’s chilling vocal refrain, “Don’t be a labyrinth anymore.”

Mastered specifically for vinyl by Taylor Deupree (12k), and with the additional step taken to create lacquers and metal stampers by SAE Mastering, 'Deforestation' sees a gatefold 180-gram release from Lost Tribe Sound that, like the material, takes no shortcuts. Both the album’s acetate and test pressing were scrutinized for anomalies on world-class vinyl setups at Arizona’s esteemed high-end audio dealer and vacuum tube specialists, Arizona Hi-Fi. Concluding the deluxe package and connecting intimately with the material within are stark, disintegrating images courtesy of renowned minimalist photographer Christy Romanick (Rivulets, Chihei Hatakeyam).

"It’s the way folk music should sound in 2015, post Hood, mid Benoit Pioulard. It’s a seamless fusion of the electronic and acoustic, with both elements fully realised yet enmeshed – tied together by the poignant melancholic vocals." - CYCLIC DEFROST

"BEST OF FOLK/POP 2015 - Deforestation will puts its hooks into you slowly and sink them in deeper with each listen. There is such an abundance of layered sound design and solid song craft here that something new seems to be revealed with every spin..." - STATIONARY TRAVELS

"Smith's whisper feels like it's drifting phantom-like through the trees, with a cricket's near-subliminal chirp appearing alongside a hypnotic, dubby beat pulsation and electric guitar shadings" - TEXTURA

"A pale, fading light sinks its sharp fangs into the forest. Mute Forest’s Deforestation abides inside. In small but noticeable degrees the light changes. It’s the unstoppable intrusion of an approaching dusk." - FLUID RADIO

"If we were subject to a certain restraint to keep only the important works, those that affect us and carry a message, then the albums signed by Kael Smith and his various identities (Khale, Mombi, Mute Forest) would be among them." - SUN BURNS OUT